A Documentary About... Motherhood

I'm a huge documentary film fan.  So when my friend Valerie told me that she knew of someone who was making a documentary film about motherhood, and who was looking for mothers to interview, I jumped at the opportunity.

Truth be told, I didn't know much about the documentary when they showed up at my door with the camera crew a few weeks back, but I did know what it was called:  Mom is a Dirty Word.  I also had watched a fundraising trailer, which was intriguing in and of itself.

The tag line for the short stated:  "Mom is a Dirty Word" feature-documentary explores how damaging public policy and media depictions impact Mothers and their families.

Sure, I can talk about that!

I used a hair dryer and put on make up and cleaned like crazy and got rid of the kids and the dog so that we could have a calm, peaceful ambiance for the interview.  I think I was so busy getting prepared for the interview that I actually never thought about what I was actually going to say in the interview.

I kind of choked.

Not completely.  I mean, the conversation was casual and covered a wide range of issues, many of which I've written about in this blog - the sad state of maternity leave in this country, the reasons why mothers are leaving professional careers in droves, the difficulties women face when trying to reenter the workforce, the adjustment to being a stay at home mom, the regrets we face, the things we gain, and learning to let it all go, among other things. 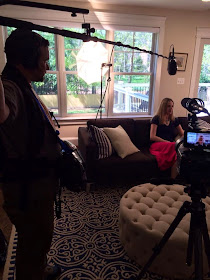 It was nice and informal and the conversation flowed naturally.

But at the end, the interviewer asked me if I had one thing to say about motherhood, what would it be?  And could I please look in the camera and say it?

Um.... my mind raced.  Surely, I needed to come up with something really deep, really poignant, really meaningful here.  But the pressure, my God, the pressure!  How to narrow it down?  How to word it?  What was it, anyway?

I rambled a few things, and I honestly can't remember what exactly is I said.  But I do know I said the following:

Being a mother is the best job in the world.

REALLY?  THAT'S THE BEST I COULD COME UP WITH?  THE MOST RIDICULOUS CLICHE EVER THAT EVERYONE SAYS AND EVERYONE'S HEARD BEFORE AND REALLY CONVEYS NOTHING DEEP OR EMOTIONAL OR REAL ABOUT MOTHERHOOD?

Yup, I choked.  (And this isn't the first time this has happened to me on television - see my interview on the British version of candid camera where I absolutely BOMBED by clicking here).

Hence, there is a very real chance I won't appear in the documentary, but that doesn't mean you shouldn't support the documentary!  Because it is timely and poignant and generally needed.  There's simply not enough out there by mothers, about mothers, for mothers.

There is currently a fundraising effort underway - please support the documentary by donating here.

There's also a new trailer (featuring my dear friend and mentor, Valerie Young - there are no words to describe how awesome she is).

You can find more information on the documentary's website here.

And you can tell all your friends about it.  (There's no click for that).

The director hopes to get the film finished by election season.  I for one can't wait to see it (whether I am in it or not!).